Establishing a Wireless Connection with Arduino and NRF24l01

What Is the NRF24L01 Module and How Does It Work?

There are different ways for wireless communication such as Bluetooth, WiFi, and etc. Using the NRF24L01 module is one of the most affordable, simple, and practical ways. 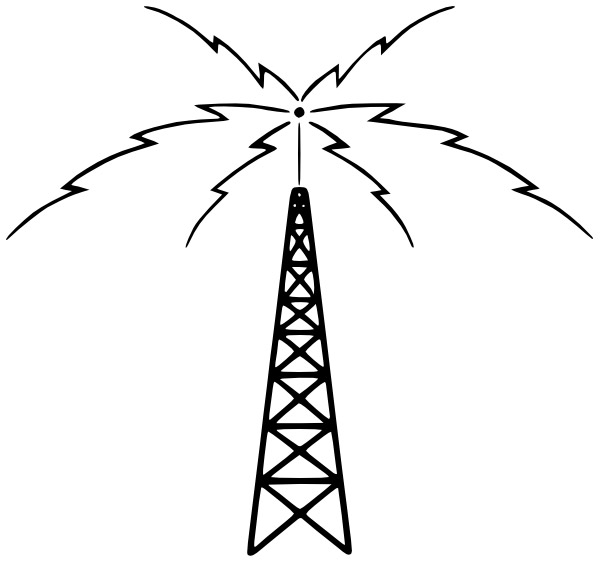 NRF24L01 Module is a transceiver module, which means it can both send and receive data. NRF24L01 works in 2.4 GHz frequency and uses GFSK modulation. The maximum speed of data transmission of this module is up to 2Mbps and the maximum board is 100 meters (for models with an external antenna the board can be 1 km) in free space.
Capability to create a network is one of the NRF module advantages; each NRF module can be connected to 6 other modules.  Therefore, the affordable price, being easy to use, small size, networking capabilities, high board and suitable data transfer speeds make the NRF24l01 module a great option for wireless and IOT projects.  NRF24L01 module interface microcontrollers in SPI protocol and has 8 pins: 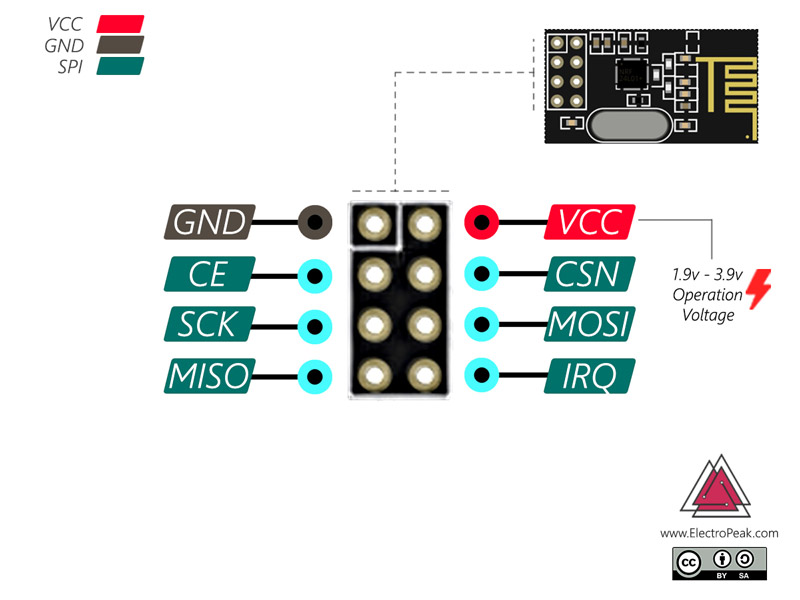 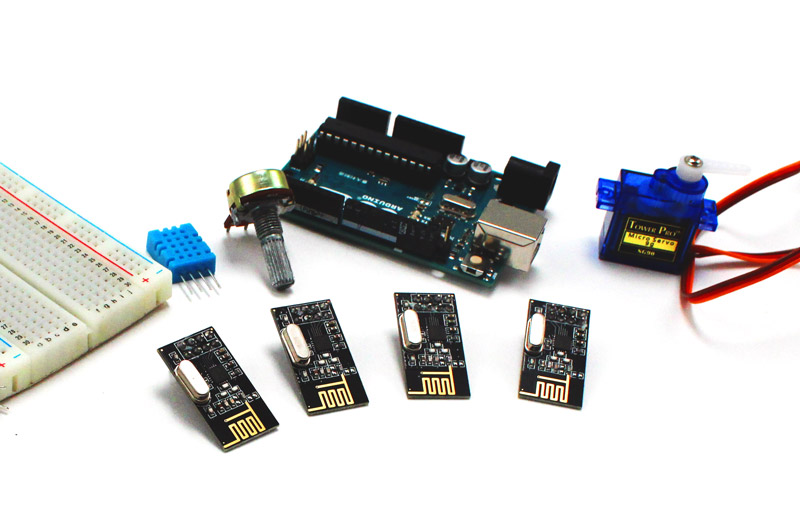 In order to connect two Arduino boards, you need two NRF24L01 modules, one as master and another as slave. In this example, using a volume on the master side, we control the servo motor on the slave side. 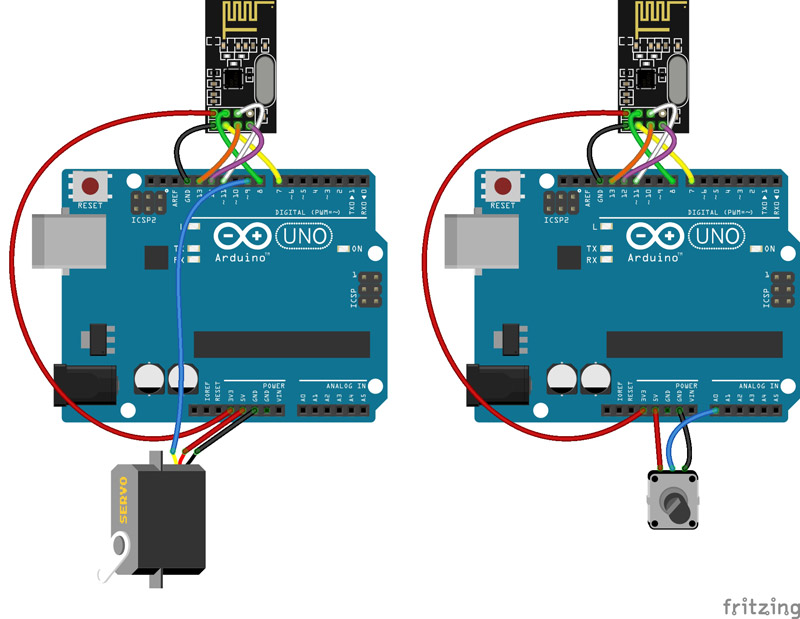 You can connect CSN and CE to any digital pins.

Connect SPI pins of the module to SPI pins on board.

You need the RF24 library to use NRF24L01 module. Download the library from the following link:

You need two different codes for slave and master to establish a connection.

Upload the following code on your master board.

Upload the following code on your slave board.

Let’s take a closer look to the code:
Create the required object for module by specifing CS and CSN pins.
Specify the address for the nodes. Be careful, the sender and receiver addresses must be the same in order to communicate.
Determine the receiver for transmitter.
Determine the transmitter for receiver.
Determine the amount of power consumption for the module, this value must be determined according to the transmitter and receiver distance.
Set the module in transmitter mode.
Set the module in receiver mode.
Sends the data by specifying its size.
If the receiver receives a data, it returns the value of 1.
Receives the data by specifying its size, and stores it in data variable.

Create a Network of NRF Modules

Using the NRF24L01 module, you can create a wireless connection and transfer data in your network.  In this example, we want to create a network with three slaves and perform a specific operation in the slaves based on the temperature data, the volume value and the key status sent from the master.  There are two ways to build the network, the simpler way is to act as in the previous example and to have a maximum of 6 separate addresses to send information to the master through 6 slaves.  In the second way, the tree method is used for networking. As a result, the main master is only associated with its subset, and each subset is expanded as a tree. Consequently, we can construct a network containing a maximum of 3125 NRF24L01 modules, so this method is more effective from the first one. 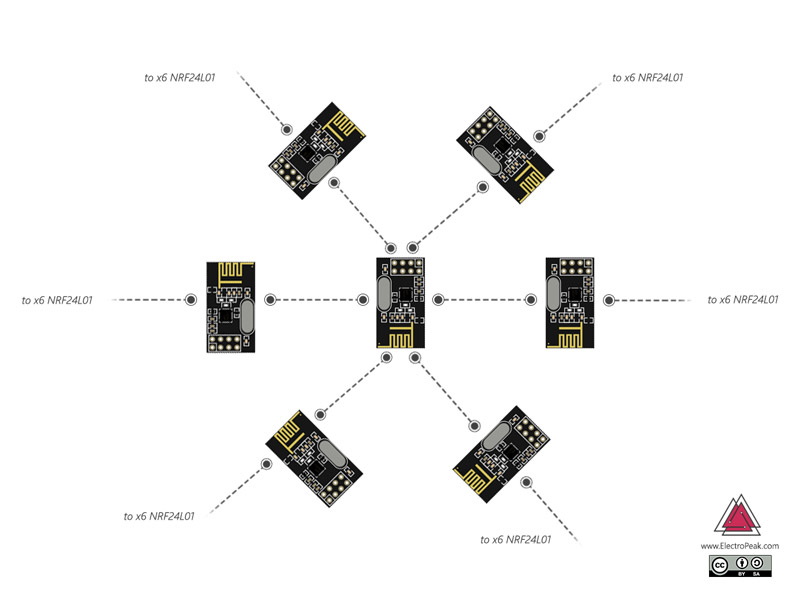 To use this method, you need the RF Network library. You can download it from the following link:

Try to make a two-way connection with two NRF24L01 modules, which means that each module has the ability to send and receive data. 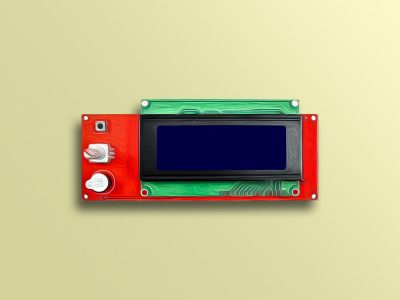 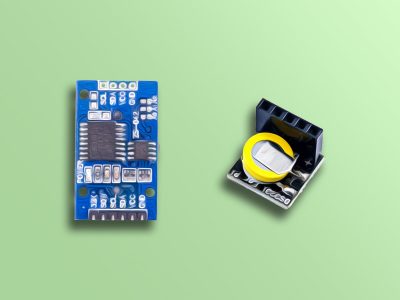